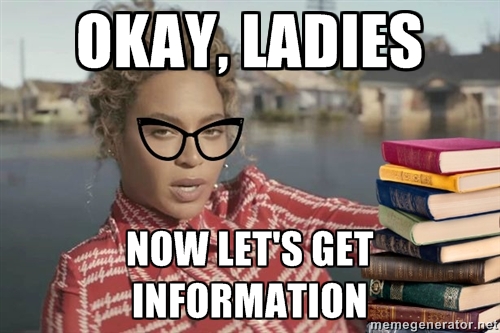 As promised in Episode 3, here's some fuel for your noggin' related to the topics we discussed.

WOMEN, SEXUALITY, AND THE EXCLUSION OF WOMEN'S SEXUALITY FROM SEX ED

On the exclusion of female pleasure from our conversations about sex:

In the interview, I highly recommended the book Girls & Sex, by Peggy Orenstein. In this NPR interview, the author discusses the importance of talking to young women about their bodies and their pleasure, and the importance of ignoring cultural messages that tell them to disown their own pleasure while focusing on their partners'.

"Parents don't tend to name their infant baby's genitals if they're girls. For boys, they'll say, 'Here's your nose...here's your waist, here's your

Then they go into puberty education class...and you see only the inside anatomy — that thing that looks like a steer head, with the ovaries and everything — and then it grays out between the legs, so we never talk about the vulva, we never talk about the clitoris. Very few girls explore, there's no self-knowledge, and then they go into their sexual experiences and we expect them to be able to have some sense of entitlement, some sense of knowledge, to be able to assert themselves, to have some sense of equality, and it's just not realistic that that's going to happen."

A suggestion for anyone wanting to learn more about female sexual desire:

Melanie recommended the book Come as You Are, "an essential exploration of why and how women’s sexuality works—based on groundbreaking research and brain science." TL;DR: every woman's sexuality is different, and stress/mood/emotional attachment 100% impact women's sexual desire.

ON FALSE ACCUSATIONS OF RAPE

TL;DR: THEY ARE VERY RARE. In the podcast, we discussed how when Melanie teaches young people about victim-blaming and slut-shaming, she frequently runs up against the insidious, tragic cultural belief that many rape accusations are false.

In Donna Zuckerberg's article "He Said, She Said: The Mythical History of the False Rape Allegation," she reports:

"The most commonly accepted statistic is that 2-8 percent of rape allegations are false.

To be absolutely clear: that means 2-8 percent of the reports made to the police are later proven to have been made by somebody who knew that the person they were accusing was innocent. And when you consider that many victims choose not to go to the police at all, the ratio of people who have actually experienced sexual assault to people who have falsely claimed to have experienced sexual assault gets—one presumes—even larger. The number of false rape allegations is small: it’s not zero, but it’s small. The amount of fear and worry and hand-wringing about these false allegations is disproportionate to their actual prevalence."

INCLUDING GENDER IDENTITY AND SEXUAL ORIENTATION IN SEX ED

In the podcast, Melanie and I discussed the importance of including lesbian, gay, bisexual, queer, and trans (LGBG/T) individuals in discussions about sex education. Not only is it important that these folks receive accurate, applicable information about STIs, pregnancy prevention, and sex just like their heterosexual or gender-conforming peers, but it's also incredibly important that these identities are normalized - not only for the folks who identify as being non-heterosexual or non-gender conforming, but for those who don't.

Regularly including LGBQ/T folks in discussions of sex ed helps normalize these identities, reducing isolation and internal shame among those who fall into these groups, and giving heterosexual and/or gender-conforming folks the chance to become familiar and comfortable with identities formerly seen as "other."

EXPLOITATION OF PEOPLE OF COLOR

Melanie discussed that one reason sex education should be intersectional is that much scientific research, including that related to sexual and reproductive health, was performed on non-consenting people of color.

The Tuskegee Syphilis Study, for example, "was an infamous clinical study conducted between 1932 and 1972 by the U.S. Public Health Service studying the natural progression of untreated syphilis in rural African-American men in Alabama under the guise of receiving free health care from the United States government."

Henrietta Lacks, whom I mentioned in the podcast,  had a best-selling book written about her. "She was a poor black tobacco farmer whose cells—taken without her knowledge in 1951—became one of the most important tools in medicine, vital for developing the polio vaccine, cloning, gene mapping, and more. Henrietta's cells have been bought and sold by the billions, yet she remains virtually unknown, and her family can't afford health insurance."

America also looooooves to forget its eugenics programs, which STERILIZED AFRICAN AMERICAN WOMEN UNTIL THE 1970s. Yes, you read that right.

"U.S. women of color have historically been the victims of forced sterilization. Some women were sterilized during Cesarean sections and never told; others were threatened with termination of welfare benefits or denial of medical care if they didn’t 'consent' to the procedure; others received unnecessary hysterectomies at teaching hospitals as practice for medical residents. In the

"It began as a way to control welfare spending on poor white women and men, but over time, North Carolina shifted focus, targeting more women and more blacks than whites.  A third of the sterilizations performed in North Carolina were done on girls under the age of 18.  Some were as young as nine years old.

During that time period [from 1929 to 1974], 7,600 people were sterilized in North Carolina.  Of those who were sterilized, 85 percent of the victims were female and 40 percent were non-white." YEP. BET YA DIDN'T LEARN THAT IN HIGH SCHOOL U.S. HISTORY CLASS!

In the episode, we talked about the shame and stigma surrounding STIs. Melanie recommended this TedxTalk called "STIs Aren't a Consequence,They're Inevitable."

"An STI is not a reflection of your character or a consequence of a bad decision. It is an inevitably of being a human being on this planet who comes into skin contact with other humans. Period. End of discussion. "

In the talk, Ella Dawson explains why stigma around sexually transmitted infections (and herpes in particular) exists, and also how incredibly common STIs are. According to the World Health Organization, 2 in 3 people worldwide have Herpes Simplex Virus 1, a particular strand of the herpes virus that causes cold sores, and can in some cases cause genital herpes. Herpes Simplex Virus 2, a strand of herpes that exclusively causes genital symptoms, affects 1 in 6 people and 1 in 5 women.

Melanie discussed how teaching children about consent outside the context of sexuality cartoon about consent, written by a mother.

"Once my daughter became old enough to understand and respond to questions, I began asking for permission to touch her. Why do I do this? As a sexual assault survivor, teaching my kid about consent is a form of activism. If I had the words to describe what was happening to me as a young girl, I may have stepped up and said something sooner. Or maybe it would have alleviated the confusion and shame I felt for years

I realized that I'd referenced "affirmative consent" in several episodes, but I have never defined in during an episode for people who aren't familiar with the term. The principles of affirmative consent are defined here, but the short version is:

“Affirmative consent is a knowing, voluntary, and mutual decision among all participants to engage in sexual activity.  Consent can be given by words or actions, as long as those words or actions create clear permission regarding willingness to engage in the sexual activity. Silence or lack of resistance, in and of itself, does not demonstrate consent.”

On affirmative consent and education:

Melanie and I spoke about the importance of teaching kids about sexual consent during their sex education. In the same article above about affirmative consent legislation at the college-level, we learn that:

Melanie mentioned a curriculum for sex educators called "Teaching Transgender," published by Out for Health and Planned Parenthood of the Southern Finger Lakes (PPSFL). (In the podcast, we accidentally credited the Center for Sexual Education with the curriculum!)

"With particular attention paid to intersectional approaches and marginalized identities," the curriculum addresses "transgender people’s identities and experiences" and the "nuances of teaching about transgender-related topics." The end goal is that "participants will be well prepared to acknowledge, support, and engage with transgender people in an affirming manner."

An organization for sexual health workers who are Women of Color:

Melanie spoke about the Women of Color Sexual Health Network - a group of sexuality professionals which focuses "on the sexual and reproductive health needs of women of color." WOCSHN is place for women of color sexuality professionals to share their experiences; a place to gain support when they are shut out, pushed aside, silenced, erased and otherwise considered nonexistent....We wanted to look

"WOCSHN creates opportunities for the inclusion of women of color in the field of sexuality, sexology, and sexual health; challenges the White supremacy these fields were built upon."